PTC overvoltage, overcurrent, overload and other protective functions are widely used. Connect PTC directly in the circuit. When the line is short-circuited or other reasons cause the current to flow, the PTC thermistor can suppress the excessive current or even block the current to protect the Requires components or subsequent circuits. It is mainly used for overcurrent and overheat protection occasions such as power transformers, various chargers, various instruments and meters. This is the most widely used function of PTC thermistors, and we have seen more, especially in power equipment.

As shown in the figure below, the PTC thermistor is connected in series to the circuit as an overcurrent protection element, that is, to protect the transformer. When a component or load is short-circuited in the circuit due to various reasons, the current is too large. At this time, the PTC thermistor will work, which will inhibit the circuit from generating excessive current. It should be noted that while selecting the maximum non-operating current and working voltage, the zero-power resistance, operating temperature range, component packaging and other factors must also be rated. Generally, it is appropriate to select about 1.5 times the maximum working current when the circuit is working normally. .

The motor must overcome its own inertia when starting. For example, for a single-phase starting, a larger torque is required when starting. When the rotation is normal, the required torque is not very large. At this time, an auxiliary circuit can be added to the motor, which can be understood as an auxiliary source, which is equivalent to that an electric vehicle needs a greater power when climbing a slope. Connect the PTC thermistor in series to start the auxiliary In the line.

3. Degaussing applications such as color TVs and picture tubes

The function of this kind of PTC thermistor is to eliminate the influence of stray magnetic fields such as color shadow mask and terrestrial magnetism on the color screen. The automatic degaussing circuit in ordinary color TV sets generally consists of two parts, namely, a degaussing coil and a degaussing resistor. The PTC degaussing element uses its current-time characteristics to work.

After the degaussing circuit is connected in series, since the initial resistance of the PTC element is very small, the initial current passing through the degaussing coil is relatively large, so that the coil generates a strong alternating magnetic field. The resistance of the PTC degaussing element rises due to self-heating, and the current in the circuit will be gradually attenuated, so that the alternating magnetic field in the coil will also be weakened, thereby achieving the purpose of degaussing. This series of products are used in degaussing circuits for color TVs, color monitors and other CRTs.

Is there any difference between ESD diodes and TVS diodes? 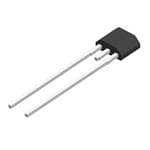 1. The role of PTC thermistor is not only used in swi...