Introduction to the working principle, classification and performance of optical fiber connectors

The connector was first developed by Japan's NTT company. FC is an abbreviation, which means that the external reinforcement method is a metal sleeve and the fastening method is a turnbuckle. In the earliest FC-type connectors, the mating end faces of the ceramic pins are planar contacts (FC).

This kind of connector has the advantages of simple structure, convenient operation, and easy manufacture. However, the end of the optical fiber is more sensitive to fine dust and is prone to Fresnel reflection, so it is difficult to improve its return loss performance. Later, the new connector was improved, using spherical butt terminal pins (PC), while the external structure remained unchanged, which greatly improved the insertion loss and return loss performance.

LC connector is developed by the famous Bell Institute. Using modular jacks (RJ), easy to operate. The size of the pin and sleeve is half that of ordinary SC and FC, which is 1.25 mm.

This can increase the density of optical fiber connectors in optical fiber distribution frames. At present, LC-type connectors have occupied a dominant position in single-mode SFF, and their applications in multi-mode SFF are also developing rapidly.

SC type is an optical fiber connector developed by NTT Corporation of Japan. The housing is rectangular, and the structural dimensions of the pin and the coupling sleeve are exactly the same as those of the FC type. The pin end faces mostly adopt APC or APC grinding method; the fastening method is bolt type, without rotation. This connector has the advantages of low price, convenient operation, small interference loss fluctuation, high compressive strength, and high installation density.

MT-RJ type is an MT connector developed by NTT. Its shell and locking mechanism are similar to RJ. The guide pins on both sides of the small sleeve are used to align the optical fiber. In order to facilitate the connection with the optical transceiver, the optical fiber at the end of the connector adopts a dual-core (0.75mm spacing) arrangement. It is a high-density optical connector mainly used for data transmission. The standard size MT-RJ can connect two optical fibers at the same time, doubling the effective density.

Insertion Loss is the connection loss, which refers to the loss of the effective optical power of the link caused by the introduction of the connector. The smaller the insertion loss, the better, and the general requirement should be no more than 0.5dB.

Return Loss refers to the ability of the connector to suppress the reflection of the optical power of the link, and its typical value should not be less than 25dB. In the actual connector, the pin surface has been specially polished, which can make the return loss greater, generally not less than 45dB.

General requirements, optical fiber connectors must be able to be used normally at a temperature of -40oC~+70oC.

The fiber optic connectors currently in use can generally be plugged and unplugged more than 1,000 times.

Label interpretation: In the label indicating the pigtail connector, we can often see "FC/PC", "SC/PC", etc., and their meanings are as follows: The part in front of "/" represents the connector model of the pigtail, and the description is shown above . "/" indicates the cross-section process of the optical fiber connector, that is, the grinding method. 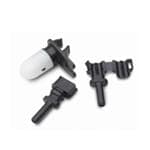 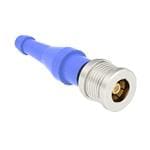 1. Introduction to the working principle, classificat...

Introduction to the working principle, classification and performance of optical fiber connectors