ITMO University scientists have developed a light-controlled antenna for reliable and fast data transmission in 5G networks. The technology expands the coverage area even in places with a weak signal, distributing radiation from the base station to subscribers - gadgets, drones, sensors and other devices. The advantages of the developed antenna over analogues are energy efficiency, economical production, and a simple adaptive design.

There are more and more devices operating in the always-on network mode. These are not only mobile gadgets, but also smart home systems, unmanned vehicles, drones and various sensors. To ensure the quality of work of an annually growing number of devices, a transition to the new 5G mobile communication standard is required, which involves the use of new frequency bands - up to 52 GHz. But at such high frequencies, uninterrupted and fast data transmission is possible only within line of sight from mobile base stations. Even an ordinary interior wall can become a serious barrier to signal propagation.

"Shadow" areas can be covered with additional stations, but this requires large technical and financial costs. Scientists from the New Institute of Physics and Technology at ITMO University have proposed a simpler and more cost-effective solution — a modular optically controlled antenna.

There is no complex and expensive electronics in the design of the antenna. It consists of the same modules, which, as in the Lego constructor, can be removed or supplemented with new ones. This allows you to scale the antenna to any size, which greatly simplifies and reduces the cost of the development process, as well as adapting the solution to customer requirements. The device can be placed both on the facade of buildings and installed indoors. In addition, the development does not require a large amount of electricity. If you hang the equipment on the outer wall of the house, then it will be enough to install a solar cell on it to power it.

At the moment, a working prototype has been created, which already demonstrates high reliability in data transmission. The future plans of scientists are to test the antenna in various conditions and refine it to a market product. 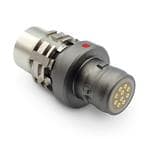 2. What tests are generally required for electronic c...

What tests are generally required for electronic components?

Mubadala, Sberbank and RDIF become investors in the IXcellerate

Why do we need to add capacitance to l7805cv

7. The role and types of EMI filters

The role and types of EMI filters

8. The following issues should be paid attention to b...

10. The manufacturing principle of ceramic capacitors ...