The 6N137 optocoupler is a single-channel high-speed optocoupler, with temperature, current and voltage compensation functions, and high input and output isolation. It has the characteristics of unidirectional transmission of information, bandwidth, low parasitic feedback, strong noise cancellation, and good electromagnetic interference resistance. Therefore, it has been more and more widely used in both digital and analog circuits. It has the characteristics of small size, close coupling, low drive power, fast action speed, and wide operating temperature range.

B. It is used for bistable output circuit. Since light-emitting diodes can be connected in series into two emitter circuits respectively, it can effectively solve the problem of output and load isolation.

Therefore, 6n137 has important functions such as anti-interference, electrical isolation, and signal amplification.

It is input by two levels of signal yin and yang, the light emitting diode emits light, passes to the photodiode through the on-chip optical channel, the reverse biased photodiode is turned on after illumination, and is sent to an input end of the AND gate after the current-voltage conversion The other input is the enable terminal. When the enable terminal is high, the AND gate outputs a high level. After the output transistor is reversed, the photoelectric isolator outputs a low level. When the input signal current is less than the trigger threshold or the enable terminal is low, the output is high, but this logic high is an open collector, and a pull-up resistor or voltage adjustment circuit can be added to the receiving circuit. 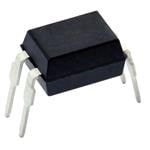