ASML has basically completed the design of 1nm lithography machine 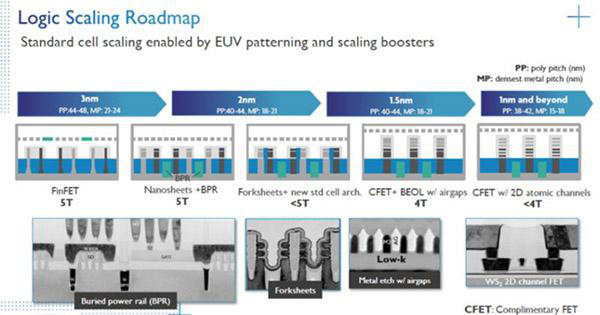 At ITF Japan 2020, IMEC proposed a roadmap for miniaturization of logic devices of 3nm, 2nm, 1.5nm and below 1nm.
The PP marked under the name of the upstream technology node is the pitch (nm) of the polysilicon interconnection line, and MP is the wiring pitch (nm) of the fine metal. It should be noted that the past technology node refers to the minimum processing size or gate length, but now it is just a "tag" and does not refer to the physical length of a certain location.
The structures and materials introduced here, such as BPR, CFET, and channels using two-dimensional materials, have been published separately.

According to IMEC, ASML has completed the basic design of the high NA EUV exposure system as the NXE:5000 series, but the commercialization is planned around 2022. This next-generation system will become very tall due to its huge optical system, and it is likely to stand under the ceiling of a traditional clean room.

Van den hove finally said: "The purpose of miniaturization of logic device technology is to reduce power consumption, improve performance, reduce area, and reduce cost, which is commonly referred to as PPAC. In addition to these four goals, as the miniaturization moves toward 3nm, 2nm, 1.5nm, and even beyond 1nm to reach sub-1nm, we will strive to achieve environmentally friendly microprocessors that are suitable for a sustainable society." He said that he will continue to work on process miniaturization and show great enthusiasm.
For more news, please click : https://www.chipmall.com/info/

5. What are the performance of electronic component a...

What are the performance of electronic component after damage

8. DC-DC converters for high-performance industrial a...