LM324 series devices have four operational amplifiers with true differential inputs, which have true differential inputs. Compared with standard operational amplifiers for single-supply applications, they have some significant advantages. The quad amplifier can work at a power supply as low as 3.0 volts or as high as 32 volts, and the quiescent current is one-fifth of the quiescent current of the MC1741. The common-mode input range includes a negative power supply, thus eliminating the need for external biasing components in many applications.

Each package has 4 amplifiers 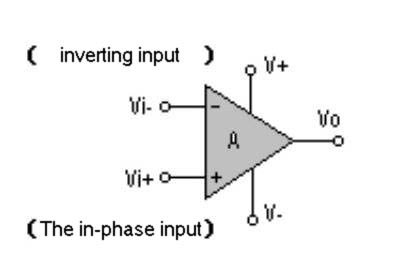 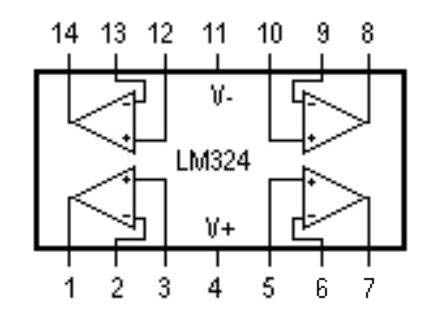 The circuit is shown in the attached drawing. This amplifier can replace transistors for AC amplification, and can be used for amplifier pre-amplification. The circuit does not need to be debugged. The amplifier is powered by a single power supply, with a 1/2V+ bias composed of R1 and R2, and C1 is a vibration-eliminating capacitor. 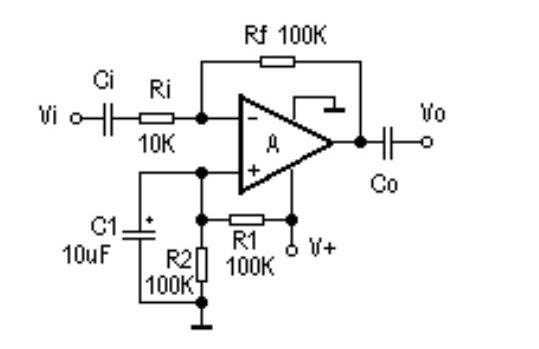 The amplifier voltage amplification factor Av is only determined by the external resistors Ri and Rf: Av=-Rf/Ri. The negative sign means that the output signal is opposite in phase to the input signal. According to the value given in the figure, Av=-10. The input resistance of this circuit is Ri. Under normal circumstances, first take Ri equal to the internal resistance of the signal source, and then select Rf according to the required magnification. Co and Ci are coupling capacitors.

see Attachment. The non-inverting AC amplifier is characterized by high input impedance. Among them, R1 and R2 form a 1/2V+ voltage divider circuit, and the op amp is biased through R3. 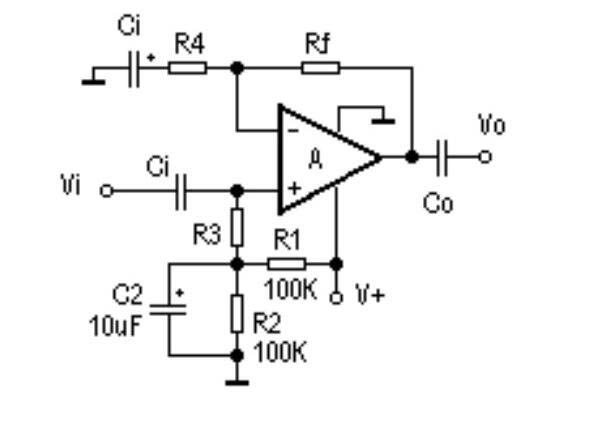 This circuit can divide the input AC signal into three outputs. The three signals can be used for indication, control, analysis and other purposes. The output terminal is directly connected to the negative input terminal, and the signal is input to the positive input terminal, which is equivalent to the case of Rf=0 in the in-phase amplification state, so the voltage amplification factor of each amplifier is 1, and it acts as an emitter follower composed of discrete components. the same. 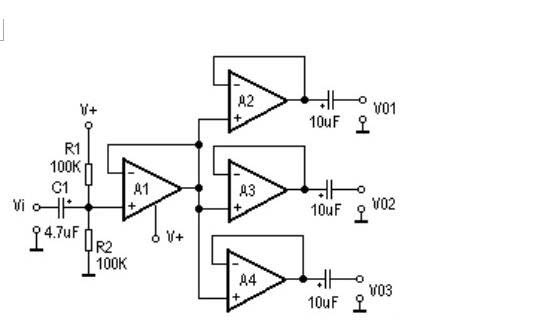 R1 and R2 form a 1/2V+ bias. The voltage at the output of A1 is 1/2V+ in static state, so the output of the op amp A2-A4 is also 1/2V+. Through the direct blocking effect of the input and output capacitors, the AC signal is taken out to form three Channel distribution output. 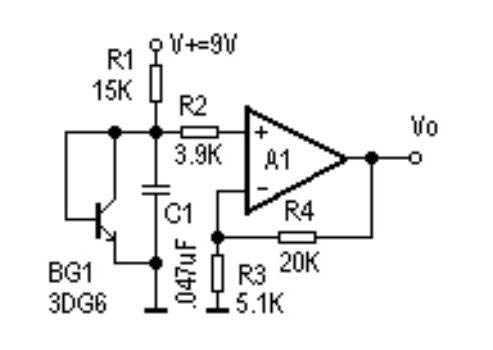 This is a linear amplification process. Connect the measurement or processing circuit to the A1 output terminal to indicate the temperature or perform other automatic control.

Many audio equipment's spectrum analyzers use this circuit as a band-pass filter to select signals of different frequency bands, and use the number of light-emitting diodes to indicate the magnitude of the signal amplitude on the display. The center frequency of this active bandpass filter, the voltage gain Ao=B3/2B1 at the center frequency fo, the quality factor, the 3dB bandwidth B=1/(п*R3*C) can also be determined according to the design Q, The values ​​of fo and Ao are used to obtain the parameter values ​​of the various components of the band-pass filter. R1=Q/(2пfoAoC), R2=Q/((2Q2-Ao)*2пfoC), R3=2Q/(2пfoC). In the above formula, when fo=1KHz, C takes 0.01Uf. This circuit can also be used for general frequency selective amplification. 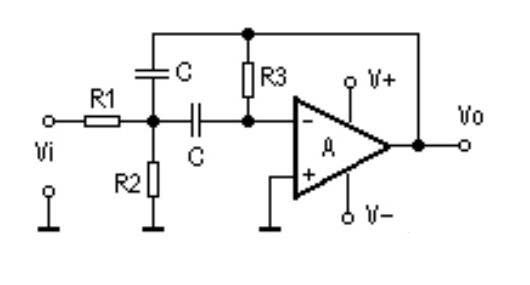 When the feedback resistance of the op amp is removed, or when the feedback resistance tends to infinity (that is, the open loop state), theoretically, the open loop amplification factor of the op amp is also infinite (in fact, it is very large, such as the LM324 op amp open loop The magnification is 100dB, which is 100,000 times). At this time, the op amp forms a voltage comparator whose output is either high level (V+) or low level (V- or ground). When the voltage at the positive input terminal is higher than the voltage at the negative input terminal, the op amp outputs a low level. 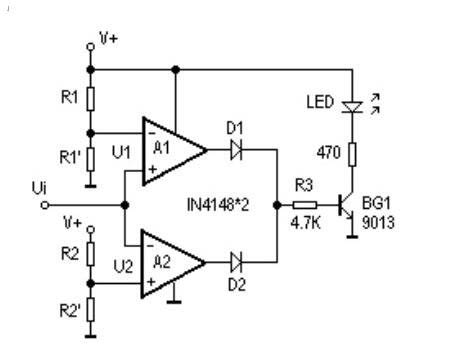 In the figure, two op amps are used to form a voltage upper and lower limit comparator. Resistors R1 and R1 ˊ form a voltage divider circuit, which sets the comparison level U1 for op amp A1; resistors R2 and R2ˊ form a voltage divider circuit, which is set for op amp A2. Set the comparison level U2. The input voltage U1 is added between the positive input terminal of A1 and the negative input terminal of A2 at the same time. When Ui 》U1, the operational amplifier A1 outputs high level; when Ui

If you select U1》U2, when the input voltage Ui exceeds the range of [U2, U1], the LED will light up, which is a voltage double limit indicator.

If you choose U2》 U1, when the input voltage is within the range of [U2, U1], the LED will light up, which is a "window" voltage indicator.

This circuit is used in conjunction with various sensors. With a little modification, it can be used for double limit detection, short circuit, open circuit alarm, etc. of various physical quantities. 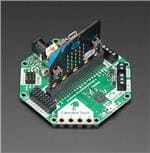