Since the load connected to the secondary side of the current transformer is a current coil with relatively small impedance, its secondary measurement is working in a state close to a short circuit. According to the magnetomotive force balance agenda formula: I0N=1I1N1-I2N2, it can be seen that since most of I1N1 is offset by I2N2, the total magnetomotive force I0N1 is very small, that is, the exciting current I0 (ie no-load current) is very small, only once What percentage of the current I1. If the secondary side is open, then I2=0, I1N1=I0N1, that is, I1=I0, and I1 is the load current of the primary circuit, which does not change due to the change of the secondary load of the transformer. Therefore, at this time, the excitation current is I1, which greatly increases by several tens of times, and the excitation potential is greatly increased by several tens of times, which will produce:

1: Due to the large number of turns of the secondary winding, dangerous high voltages will be induced, endangering the safety of people and equipment.

What is an RF mixer and what types are there? 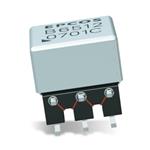