The synthetic carbon film potentiometer is made by coating the surface of the substrate with materials such as carbon black, graphite, and quartz that have been ground. Because of the simple process, it is the most widely used potentiometer. Advantages: high resolution, strong wear resistance and long service life. Disadvantages: the noise generated by the current is large, the nonlinearity is large, the moisture resistance and the resistance stability are poor.

Conductive plastic potentiometer is a special process DAP (diallyl phthalate) resistor paste is coated on the insulator, heated and polymerized into a resistive film, and the DAP resistor powder is thermoplastically pressed into the groove of the insulating substrate to form a solid core As a resistor. Advantages: good smoothness, excellent resolution, good wear resistance, long life, low dynamic noise, and high reliability. Disadvantages: The contact resistance is slightly larger, and the use has an ambient temperature range.

Advantages of digital potentiometers: flexible use, high adjustment accuracy, non-contact, low noise, not easy to foul, anti-vibration, anti-interference, small size, long life, etc. It can replace mechanical potentiometers in many fields. Disadvantages: Due to the limitation of CMOS technology, the passband is relatively narrow.

The difference and application of choke coil and filter 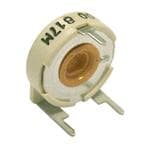 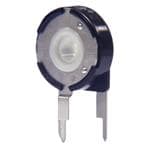 1. What is the relationship between the potentiometer...

What is the relationship between the potentiometer and the variable resistor?

2. What to pay attention to when choosing a potentiom...