What issues should be paid attention to when the capacitor is stepped down?

For example, we connect a 110V/8W light bulb with a 1uF capacitor in series, and when it is connected to an AC voltage of 220V/50Hz, the light bulb is lit and emits normal brightness without being burnt. Because the current required by the 110V/8W bulb is 8W/110V=72mA, it is consistent with the current-limiting characteristics produced by the 1uF capacitor.

In the same way, we can also connect a 5W/65V bulb with a 1uF capacitor in series to 220V/50Hz AC, the bulb will also be lit without being burned. Because the working current of a 5W/65V bulb is also about 70mA.

Therefore, the capacitor step-down is actually the use of capacitive reactance to limit current. The capacitor actually plays a role in limiting the current and dynamically distributing the voltage across the capacitor and the load.

The following figure shows a typical application of RC step-down, C1 is a step-down capacitor, R1 is the bleeder resistance of C1 when the power is disconnected, D1 is a half-wave rectifier diode, D2 provides a discharge circuit for C1 in the negative half of the mains, otherwise The capacitor C1 will not work when it is fully charged, Z1 is a Zener diode, and C2 is a filter capacitor. The output is the stable voltage value of the Zener diode Z1. 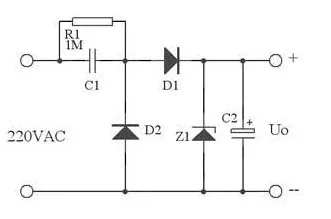 In practical applications, the EDA365 Electronics Forum believes that the following figure can be used instead of the above figure. Here, the forward and reverse characteristics of Z1 are used. Come to provide a discharge circuit for C1 in the negative half cycle of the mains. 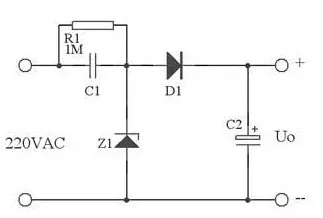 In higher current applications, full-wave rectification can be used. As shown below: 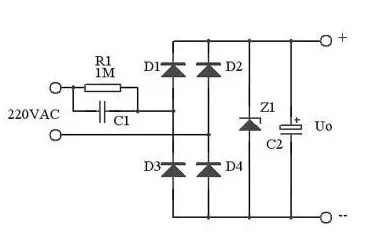 In the case of low-voltage full-wave rectification output, the maximum output current is:

1. Select the appropriate capacitor according to the current size of the load and the working frequency of the alternating current, rather than the voltage and power of the load.

3. Capacitor step-down cannot be used in high-power conditions because it is not safe.

4. Capacitor step-down is not suitable for dynamic load conditions.

5. Similarly, capacitor step-down is not suitable for capacitive and inductive loads.

6. When DC work is required, half-wave rectification should be used as much as possible. Bridge rectification is not recommended. And to meet the condition of constant load.

1. What issues should be paid attention to when the c...

What issues should be paid attention to when the capacitor is stepped down?