What is a circuit breaker

Circuit breakers can be used to distribute electrical energy, start asynchronous motors infrequently, and protect power lines and motors. They can automatically cut off the circuit when they experience serious overload, short circuit, and undervoltage faults. Its function is equivalent to a fuse switch Combination with overheating and underheating relays, etc. Moreover, it is generally not necessary to change parts after breaking the fault current. At present, it has been widely used.

When the power strip is short-circuited, the short-circuit current flows through the faulty power strip, through the cable wires, and of course also the switching appliances, and cause electrical fires. In an emergency, we certainly expect a certain circuit of switching equipment (circuit breaker) to perform protection tripping. After a short period of time, a main switch circuit breaker performs trip protection.

But after the circuit breaker completes the protection, can we close it and continue to supply power to us? What's the knowledge in this?

The threshold here refers to the protection setting value of the circuit breaker.

We call the abnormal large current flowing in the circuit breaker an overcurrent. Overcurrent includes overload current and short-circuit current.

Now, let's take a bit of mathematics and see what is called inverse time characteristic.

Wiring mode behind the board: The biggest feature of the wiring behind the board is that the circuit breaker can be replaced or repaired without rewiring, just disconnect the front-level power supply. Due to the special structure, the product has been equipped with special mounting plates and mounting screws and wiring screws according to the design requirements when leaving the factory. Special attention should be paid to the fact that the reliability of the large-capacity circuit breaker will directly affect the normal use of the circuit breaker, so during installation It must be taken seriously and installed strictly according to the requirements of the manufacturer. 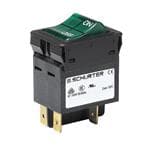 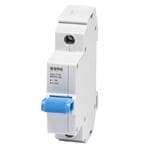 1. What is a circuit breaker

What is a circuit breaker