This year, Xiaomi launched a transparent OLED TV with a higher price, earning gimmicks and a high degree of attention, and also bringing transparent display into the public eye. Compared with TV screens, the industry generally believes that commercial scenes that pursue aesthetics, technology, space, and budget are more suitable for transparent display. 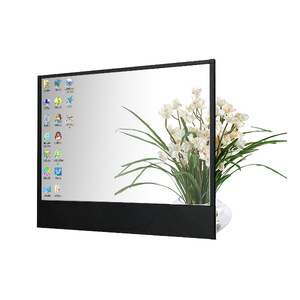 In recent years, OLED has become a popular display technology in the global TV field. With the joint promotion and operation of many color TV brands, it has gradually gained a foothold in the high-end TV field. According to data from the research organization Omdia, OLED products will account for 31.5% of the global TV product market of more than US$1,500.

Industry experts believe that OLED’s internet celebrity attribute comes with its own traffic, and OLED’s every move in the commercial field is also attracting attention, especially the technologically-sense transparent OLED display.

Earlier, the application of transparent OLED screens to the windows of Beijing Metro Line 6 and Shenzhen Metro Line 10 attracted the attention of industry, society and ordinary consumers. This screen can display real-time information, such as weather forecasts and news, train operation and train location, etc. It can be described as a walking billboard. Also using transparent OLED to climb the hot search list is Xiaomi TV. After launching a transparent TV priced at 50,000 yuan, Xiaomi has earned enough attention. However, how long the OLED transparent display can stay on the home track is always a question mark.

Industry experts believe that commercial scenes emphasize a sense of science and technology and a sense of space, which is an area where transparent display can flex its muscles. In an interview with a reporter from China Electronics News,CEO Philip chen from chipmall electronics component.

Think Tank Institute of Integrated Circuits said that the display in commercial scenes has relatively simple display content and has relatively loose requirements for display performance.

1. Transparent display technologies such as OLED and ...

2. Liquid crystal display will not be replaced, China...