The working principle of LDO and its application examples 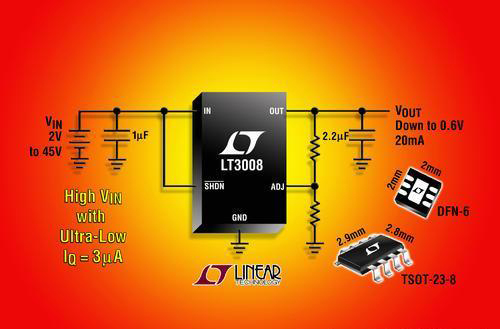 The startup time of the LDO is also called the initial load response or power-up time. In high-performance systems, this requirement is very strict (for example, strict power-up sequence), which requires fast power-up. The ON state of the linear regulator is when the output voltage reaches 95% of the rated output. The start-up time is affected by the gain, bandwidth, output current, and the voltage drop of Vin and Vout of the feedback loop. The schematic diagram of the LDO is as follows: 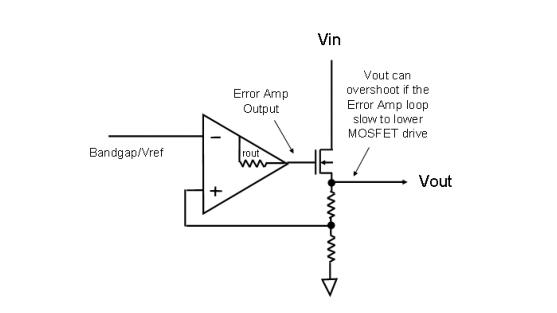 To get a fast start-up, the MOS transistor must be turned on as soon as possible. The MOS tube is controlled by the error amplifier, and the bandgap reference source (bandgap) is the input of the error amplifier, so the bandgap reference is required to start quickly. Fast start-up will cause the output to overshoot, and the rapid voltage rise will cause a large charging current of the output capacitor, which may cause reliability problems, so the start-up time can meet the needs. In some occasions (such as RF power amplifier), LDO is required to reduce overshoot and start slowly. This requires adding a capacitor to the bandgap reference, which can not only reduce overshoot but also reduce noise. For example, TPS74201 and TPS74401 have a soft start function, which can be realized by adding a Css capacitor externally. 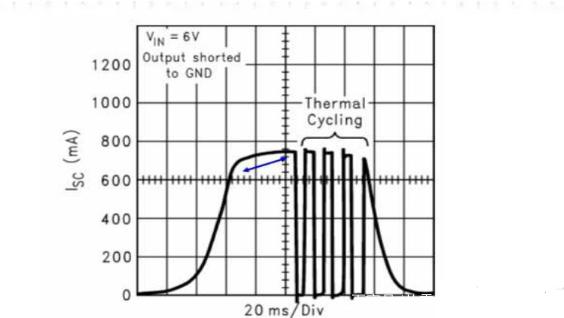 The above figure is to short-circuit the output of the LDO to quickly test the LDO overheating shutdown function. The X axis is the time and the Y axis is the current. After the LDO output is short-circuited, the LDO outputs the maximum current and consumes the most power. It can be seen from the figure that the circuit suddenly increases after a short circuit. After about 40ms, the over-temperature threshold is exceeded, the LDO is turned off, and the current is zero. After about 5 milliseconds, the temperature is lower than the over-temperature threshold, and the LDO resumes its output. Since the short-circuit condition is not eliminated, this process is repeated until the short-circuit condition is removed (the current is 0). Over-temperature recovery has a hysteresis threshold to avoid too frequent oscillations.

The active shutdown of the LDO is a method of power control, such as controlling the power-off sequence or controlling a certain part of the circuit to enter low power consumption, and the active shutdown is realized through the EN pin. It should be noted that because the output of the LDO has a filter capacitor, and the power pin of the subsequent chip is connected with a capacitor, the output voltage will slowly drop due to the charge stored in the capacitor after it is turned off. The slow voltage drop causes the subsequent circuit to stay on the low voltage for a long time. For digital circuits, the circuit may enter an error state under an abnormal power supply voltage, and these error states may trigger certain dangerous operations. Therefore, in order to avoid these situations, the power needs to be powered off quickly, that is, the capacitor needs to be discharged after the LDO is turned off. As shown below:

The LDO integrates a MOS tube at the output, which discharges the capacitor when the output is turned off. For example, LP3995 and TLV711 dual-output series power chips integrate this function.

5. Does the buzzer have positive and negative poles_h...

7. Can a capacitor continue to be used if the bulge i...

Can a capacitor continue to be used if the bulge is not serious?

8. What is the difference between a DC/DC converter a...