Performance indicators of the comparator

Since the comparator has only two different output states (zero level or power supply voltage), and the output stage of the comparator with full power swing characteristics is an emitter follower, this makes its input and output signals only extremely small The pressure difference. This voltage difference depends on the emitter junction voltage in the saturation state of the internal transistor of the comparator, which corresponds to the drain-source voltage of the MOSFFET.

includes the transmission delay caused by the signal passing through the components and the rise time and fall time of the signal. For high-speed comparators, such as MAX961, the typical value of the delay time can reach 4.5ns and the rise time is 2.3ns. Need to pay attention to the influence of different factors on the delay time when designing, including the influence of temperature, capacitive load, input overdrive and so on.

Typical amplitude comparison circuit, its circuit diagram and transmission characteristic curve are shown in the figure. 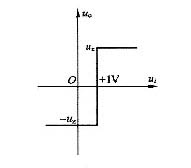 Change an input terminal of the zero-crossing comparator from ground to a fixed voltage value to obtain a voltage comparator.

Can the red varistor and blue be used in common?

1. What is the difference between a comparator and an...

What is the difference between a comparator and an operational amplifier

2. The performance index of the comparator, the class...