Unlike lithium-ion batteries that allow lithium ions to be repeatedly inserted and extracted from the positive and negative electrodes to store and release energy through redox reactions, the basis of the energy storage mechanism of supercapacitors is the electric double layer theory.

Based on the above principles, compared to traditional rechargeable batteries, supercapacitors have their own unique characteristics in terms of electrode material requirements, including high specific energy, high specific power, and long cycle life.

In terms of the characteristics of the material itself, it is required to have a high specific surface area and good electrical conductivity and adsorption performance. Carbon-based electrode materials have the above advantages, and are rich in raw materials, simple in preparation process, easy to adjust the pore state, stable chemical properties, good thermal and electrical conductivity, high specific surface area, excellent cycle performance, and can be used as a substrate with metal oxides and metal oxides. Conductive polymer composites are currently the most widely used and commercialized electrode materials for supercapacitors. 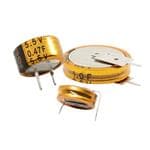 1. The classification of supercapacitors and a detail...