Varactor diode is a kind of semiconductor components, mainly used in circuit tuning, frequency modulation, phase modulation, for example, when our TV receives signals, the varactor diode can be used as a variable capacitor.

One. Characteristics of varactor diodes

1. It is mainly a kind of semiconductor components made according to the variable capacitance of the PN junction. It can be used as a variable capacitor in high-frequency tuning and communication circuits.

3. The main purpose of the varactor diode is to tune the circuit. It can change different R2, diode (D), thereby changing the capacitance of the diode, and can adjust all the changes in the required capacitance in the parallel resonant bandpass filter. . 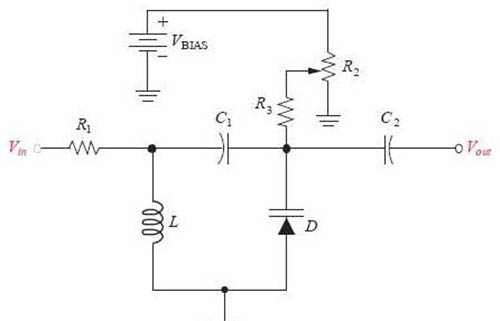 5. The maximum and minimum values ​​and resonant frequency of the oscillation circuit will vary with the square root of the capacitance ratio. Therefore, the tuning characteristic curve of the circuit is basically a parabolic curve.

6. The low-power diodes used for automatic frequency control and tuning are called varactor diodes, most of which are made of silicon materials. This kind of diode has a very large rate of change in electrostatic capacitance for voltage, instead of variable capacitance. Capacitors are used for tuning loops, phase-locked loops, and are mainly used for channel conversion and tuning circuits of TV tuner.

Two. How to distinguish the positive and negative poles of varactor diodes

Prepare a red test lead to connect to one section of the varactor diode, and use a black test lead to connect the other section. If the resistance value tested is 6.5kΩ, record the number of needle grids on the table n′≈19.7 grids, and then alternate the pin test to determine the positive The negative pole is actually the R×1k gear of the 500-type multimeter.

First connect the red test lead to one end and the black test lead to the other end. If the measured resistance value is 6.5kΩ, at the same time, record the number of reciprocal deflection divisions of the table needle n'≈19.7 divisions.

Then re-measure after swapping the pin positions, and the resistance value becomes infinite.

Therefore, it is judged that the first time is the forward connection, the forward resistance is 6.5kΩ, and the forward conduction voltage VF=0.03V/div×9.7div=0.59V. The second time belongs to the reverse connection method, and the pin near the red ring can be measured as the positive pole.

It is recommended to use a linear capacitance meter with a 100pF range for testing.

1. The characteristics of varactor diodes How to dist...