Principles and advantages of AMR magnetic sensors based on magnetoresistive technology

Traditional magnetic sensors use the Hall effect to sense the strength and direction of the magnetic field. In recent years, with the gradual development and maturity of magnetoresistance (Magnetic Resistance) technology, more and more products have begun to use magnetic sensors based on magnetoresistance technology, whether in the consumer or automotive and industrial markets.

The basic structure of the AMR magnetic sensor is a Wheatstone bridge composed of four magnetoresistors, where the power supply is Vb, and the current flows through the resistance. When a bias magnetic field H is applied to the bridge, the magnetization direction of the two oppositely placed resistors will rotate toward the current direction, and the resistance value of the two resistors will increase;

The magnetization direction of the other two oppositely placed resistors will rotate in the opposite direction to the current, and the resistance of the two resistors will decrease. The value of the external magnetic field can be obtained by testing the output voltage difference signal of the two output terminals of the electric bridge.

Magnetic sensors based on anisotropic magnetoresistance (AMR) technology have the following advantages:

● AMR magnetic sensor has high frequency, low noise and high signal-to-noise ratio, and its performance is much higher than that of traditional Hall sensors;

● AMR magnetic sensor has excellent performance within the range of the earth's magnetic field, and does not change with temperature, compass application, measurement accuracy can reach 1 degree;

● AMR can be integrated with CMOS or MEMS on the same silicon chip;

● AMR technology only needs one layer of magnetic film, the process is simple, and the cost is low.

Early MEMS magnetic sensors required two MEMS Dies (one for sensing the X/Y-axis magnetic field, and the other for sensing the Z-axis magnetic field) and an ASIC Die for signal processing. Such a design has a complicated structure, a large volume, and a high cost. With the advancement of design and manufacturing technology, Die is getting smaller and smaller, but generally a MEMS Die and an ASIC Die are still needed.

MEMSIC uses proprietary technology to perfectly combine MEMS technology and standard CMOS technology, directly integrates AMR magnetoresistive material on the surface of ASIC material, and uses an original ramp structure to sense the magnetic field signal in the Z-axis direction. Such a highly integrated single-chip design, and the use of wafer-level packaging, has been cast into the industry's smallest three-axis magnetic sensor.

2. Leading products of the same level several times or tens of times

In this regard, MEMSIC provides mature and customizable algorithms in software to calibrate the direction. However, when the interfering magnetic field is very large, there will be obvious residual magnetism inside the magnetic induction element, and the software calibration algorithm cannot do anything about it;

MMC5603NJ uses Auto Set/Reset mechanism in chip design. This mechanism is to perform paired operations in both positive and negative directions on the sensitive pole of the magnetic induction element, which can eliminate the inherent offset inside the magnetic sensor and offset the drift caused by changes in time, temperature and other factors.

The temperature drift of MMC5603NJ is only ±0.01μT/℃, which is far lower than similar products. Therefore, MMC5603NJ can maintain consistent measurement accuracy and stable and reliable performance in a variety of harsh environments.

In addition, MMC5603NJ also provides a selectable sensitivity of 20/18/16 bits, a data output rate of up to 1000Hz, a minimum RMS noise level of 0.15μT, and a hysteresis of only 0.02%, which enables fast calibration or even calibration-free electronics Compass becomes possible...

The above main performance parameters, compared with products of the same level on the market, MMC5603NJ maintains several times or tens of times the lead. 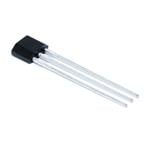 Principles and advantages of AMR magnetic sensors based on magnetoresistive technology