Earlier in the day, LG announced that it is cooperating with Swedish manufacturer Assa Abloy Entrance Systems to develop automatic sliding doors with a built-in transparent OLED display. The goal will be for businesses, and LG said they will be able to greet customers, communicate with employees or display advertisements. Allow employees to learn more information when entering and leaving the company. 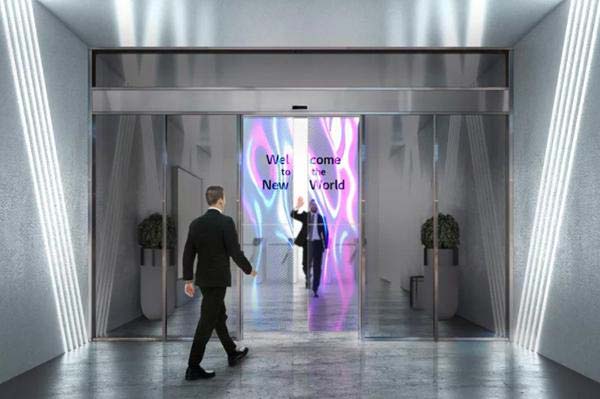 What is a transparent OLED display, that is, a self-luminous transparent organic OLED screen, which is made of OLED, but uses a transparent process, just like the sci-fi transparent screen in the movie, which makes the things inside the screen feel like floating in front of people same.

OLED transparent screens have many advantages. First, transparent OLEDs have the inherent characteristics of ordinary OLED screens, such as high contrast and wide color gamut. Secondly, the user can see the displayed content on both sides, which greatly increases the user’s viewing experience. Finally, the non-luminous pixels in the transparent OLED screen are in a highly transparent state, which can achieve the effect of virtual reality overlay display.

LG has demonstrated its transparent displays before, and has launched a series of transparent signs at the beginning of last year. Now we see the application of these panels in the real world. In August, LG announced that its displays were used in subway car windows in Beijing and Shenzhen. OLED-Info reported that Panasonic and Xiaomi’s transparent OLED TVs both use LG panels. Secondly, transparent OLED is also widely used in exhibitions, architectural exterior glass, entertainment, medicine and other fields.

Samsung, another major display manufacturer in South Korea, has also tried transparent OLED displays in the past, but the Korea Herald reported in 2016 that it had stopped production of the product.

LG’s announcement did not disclose when these high-end doors can be used by enterprises. There are still many limitations for transparent displays. However, considering that transparent OLED technology has begun to be deployed, they should not be too far away from the decoration world. Let us stay tuned.