Varistor (MOV) is a non-linear resistance element with zinc oxide (ZnO) as the main component. The surge current tolerance and non-linear coefficient of this element are very large. Below the threshold voltage, the resistance is very high and there is almost no current flow. However, if the threshold voltage is exceeded, the resistance drops sharply, and the amplified current can be discharged. Due to this characteristic, as a protection component of electronic and electrical equipment, it plays a great role in the absorption of abnormal voltage and the absorption of lightning surges. .

Varistors are generally used in parallel in a circuit. When the voltage across the resistor changes sharply, the resistor short-circuits the current fuse, which plays a protective role. Varistors are often used in circuits for power supply overvoltage protection and voltage stabilization.

4. Leakage current Il: the current that flows when the maximum DC voltage Udc is applied to the varistor. When measuring the leakage current, usually add Udc=0.83U1mA voltage to the varistor (sometimes 0.75U1mA is also used). Generally, the static leakage current Il is required to be less than or equal to 20μA (there are also requirements for less than 10μA). In actual use, what is more concerned about is not the size of the static leakage current itself, but its stability, that is, the rate of change after the impact test or under high temperature conditions. After the impact test or under high temperature conditions, the rate of change does not exceed one time, which is considered stable

As a varistor with a very wide range of applications, overvoltage protection varistors are often used to protect silicon controlled rectifiers. Then, according to the current capacity, how should we choose the appropriate overvoltage protection voltage? What about the varistor? In general, the 3kA varistor model is usually used for surge absorption of electrical equipment, while the 5kA resistor model is mostly used for lightning strikes and overvoltage absorption of electronic equipment, and the 10kA model is used In the protection of lightning strikes. Here we take lightning protection as an example to illustrate.

Usually in the test, we will choose the commonly used integrated wave (1.2/50μs voltage wave when the generator is open circuit output; 8/20μs current wave when short circuit output; the internal resistance of the generator is 2Ω) to assess the equipment online to resist lightning Ability to interfere with surges. In the 4kV test, the current absorbed by the overvoltage protection varistor can reach 2kA. For the 6kV test, the absorbed current value is 3kA. However, in the actual selection, the current capacity of the selected overvoltage protection varistor should be appropriately increased. 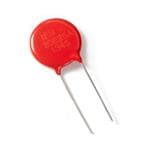 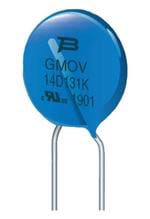 4. How to use varistor correctly