Carbon film resistors are made by using organic binders to prepare a suspension of carbon ink, graphite and fillers, coating them on an insulating substrate, and then polymerizing them by heating. Gaseous hydrocarbons decompose in high temperature and vacuum, and carbon is deposited on the porcelain rod or tube to form a crystalline carbon film. By changing the thickness of the carbon film and the length of the carbon film with the method of notching, different resistance values ​​can be obtained. Carbon film resistors have low cost, poor electrical performance and stability, and are generally not suitable for general-purpose resistors. But because it is easy to make a high resistance film, it is mainly used as a high resistance high voltage resistor. Its purpose is the same as that of high-voltage resistors.

A resistor is a frequency-independent element, which means that no matter the same resistor in a circuit of any frequency, the resistance value is the same. Not only that, the resistance values ​​of resistors in DC circuits and AC circuits are also the same. Therefore, for many electronic components, resistor circuits have relatively simple characteristics and relatively simple analysis. 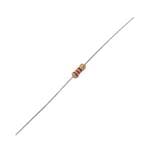