In addition to long service life, high energy efficiency and controllable light sources, LEDs also have high brightness, which makes cars safer to drive, and therefore they are increasingly used in the automotive industry. LEDs can be installed or integrated around the entire vehicle, including the front, rear, sides or even the top. LEDs have been used in high-position brake/stop lights and turn signal lights for some time, and now rear combination lights (RCL) and fog lights are also beginning to use LEDs.

In order to improve safety, automakers are beginning to put more intelligence in their lighting systems. Among them, the adaptive high beam (ADB) technology can be dynamically adjusted according to the environment and "dynamic light and shadow" lighting, such as driver assistance prompts and vehicle status information in the cab, as well as safety warnings, advanced navigation and blind zone warnings in the light bar High beam.

According to Yole Développement's data, automotive lighting may be a key node in the development of autonomous driving and will play a key role in integrating local cameras, radar, and LiDAR sensors.

Yole's "Advanced Front-Lighting Systems" report pointed out that digitalization of automobiles is a major trend in the development of automobiles, and is developing in the direction of electric vehicles and autonomous vehicles. Car digitization uses new methods to provide safety, comfort and information services. With the development of automotive technology, better communication between all road users is required, which makes external lighting more important. Figure 1 compares artificial driving and advanced assisted driving systems and architectures. 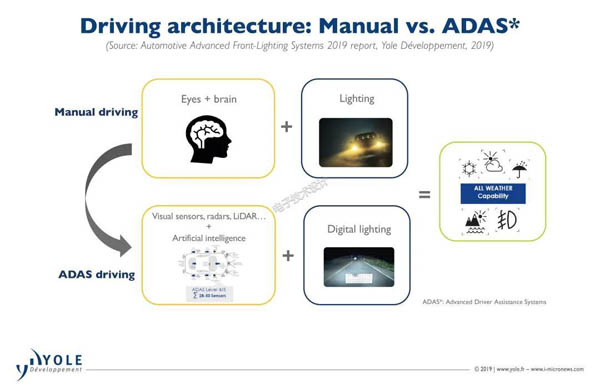 Yole pointed out that with the reduction of cost and the improvement of efficiency, brightness and package size, LEDs are rapidly popularizing. At present, all-LED headlamps have been commercialized in emerging markets, and almost all automakers and first-tier parts suppliers have developed them. Develop a complete LED headlight system. The report also said that the current advanced LED matrix headlights used in each car have more than 50 LEDs, which have been used in the high-end automotive field.


According to the market research organization LEDinside (a division of TrendForce), some suppliers are developing RGB LEDs for indoor lighting to achieve functions such as full-color mixing and dynamic environments. This is a trend in the development of smart lighting.