AMD kicked off its energy efficiency program six years ago when it set a challenging goal of improving notebook power efficiency by 25 times by the year 2020 (25×20). Well, it is now 2020 and AMD announced that not only has it met its goal but has, in fact, exceeded it. The 2020 result is based on testing of the Ryzen 7 4800H Renoir processor running in 35W programmable TDP mode.


The news that Apple was dropping Intel processors for its own internally developed Arm processors has dominated the news for the last two weeks, but intel’s problems are not limited to losing Apple. It is also losing market share in the PC business to AMD. AMD is making great strides in market share on high-performance computers, and it is also been making market share gains in notebook computers, which has been a weak spot for the company in the past.


The reason AMD is doing considerably better in notebook computers is that the company has focused heavily on improving performance and energy efficiency of its processors.


Back in 2014 I wrote a white paper for AMD on 25×20 topic and back then it was considered an audacious goal to improve power efficiency by such a large factor. Even the company admitted it had only improved power efficiency by 10x during the preceding 6 years. AMD’s notebook processors were not particularly competitive with Intel in 2014, and the company had a long way to go to compete with Intel in notebooks. Additionally, AMD lagged Intel on power management capabilities, semiconductor manufacturing process node, and CPU performance. But, since that time, driven by their 25×20 initiative, AMD has made great strides in all those areas.


Looking back to the program’s start


AMD’s methodology also calls for the two processes to not be measured simultaneously. The rationale is that when a user needs performance, the system delivers the CPU and GPU performance that is required. When the user needs battery life the power efficiency measurements then tell the efficiency story. Balancing these two key vectors is the hallmark of any good notebook design.

In the original 2014 scenario, AMD expected it would need Heterogeneous System Architecture (HSA) to reach its performance goals — where the GPU is used as a performance accelerator for compute workloads. Instead AMD’s Zen CPU cores provided most of the performance uplift. Although AMD did not require HSA, the performance testing methodology does include both CPU and GPU performance metrics in the performance benchmarks.

As can be seen in the chart, 2017 was a big leap forward on performance with Raven Ridge, where AMD combined its new Zen x86 cores with its Vega integrated graphics. The big CPU performance bump was due to improved instructions per cycle (IPC) of the Zen core and a doubling of the number of cores. The Vega graphics cores also improved through design changes and process shrinks. AMD also made incremental progress with the 12nm Zen+ cores in 2019. 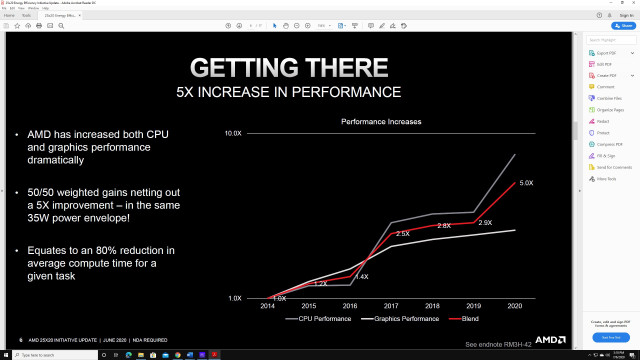 Now in 2020, AMD has another big bump in CPU performance migrating from four Zen+ core (12LP) to eight Zen 2 cores in 7nm in the Renoir processor. The Zen 2 cores also have a 15-20% improvement in IPC over Zen+. Once again, graphics also shows gradual improvements as well. 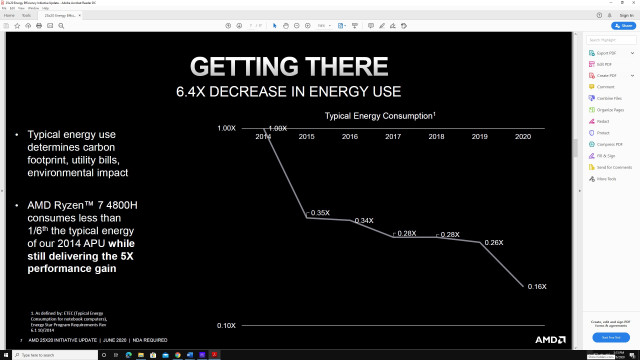 For power management, AMD’s improvements reasonably track the original 2014 goal of 6x improvement coming in at 6.4x. Process node shrinks certainly helped as AMD’s processor went from GlobalFoundries 28nm process, to its 14LP, to 12LP, and now the Ryzen mobile processors are made in TSMC’s 7FF process. 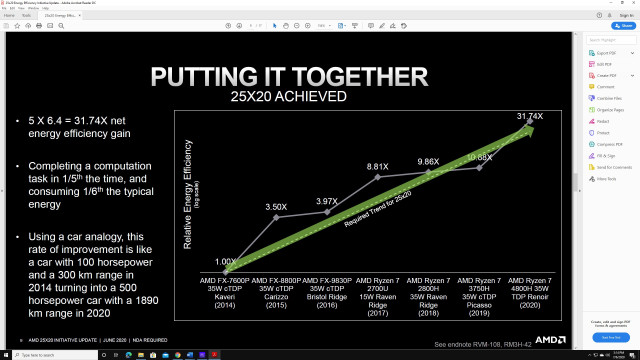 In 2014 AMD defined its 28nm Kaveri mobile product as the challenge baseline and every year the company made progress with a mix of architecture and process improvements. After Kaveri came Carrizo which had a significantly better power distribution method which reduced energy waste due to lax voltage margins.

The efficiency metric AMD is using is based on a ‘typical energy use’ model defined by the ETEC Energy Star program, which has multiple weights for various power states including: sleep power, idle power, and some loading power. While AMD might have used a representative notebook computer, each notebook would have different design choices. In an attempt to maximize testing consistency and repeatability, AMD used internal reference platforms, which is often based on one of the first devices to launch with the new product.

The power improvements were also achieved by continuing to add new power savings modes from the Advanced Configuration and Power Interface (ACPI) specifications, including new S0ix low power states. Along the way AMD made other improvements like a reduction in the company’s Infinity Fabric power. The ‘efficiency’ part of the Energy Star calculation is strongly weighted towards reducing idle power. Decreasing CPU latency when entering and exiting power states also helps in reaching idle states quicker.

AMD’s methodology changed slightly over 6 years, but the resulting processors are far better than those in 2014 and the consumer is the beneficiary with more notebook choices. While AMD took a victory lap for reaching its goal, it is not done — the company will be expanding its goals beyond notebook computers to servers and high-performance computing. Energy efficiency is extremely important for the two Department of Energy supercomputer designs for which AMD will be supplying CPUs and GPUs beginning in 2021.

4. Mini LED backlight display cost is expected to be ...

9. Evaluation board offers prototyping and simplified...